Springdale, Ark. – April 1, 2022 – In response to this week’s storms that severely impacted Springdale in Northwest Arkansas, Tyson Foods is donating more than 250,000 pounds of protein to support its hometown, which will provide at least one million meals to storm victims, volunteers, first responders and affected Tyson team members.  Tyson team members impacted by the storms are also encouraged to apply to the company’s Helping Hands program that offers financial assistance to employees following a disaster or personal hardship.

“We’re deeply saddened by the damage here in our hometown of Springdale and want to do our part to help the people affected,” said John R. Tyson, Executive Vice President and Chief Sustainability Officer, Tyson Foods. “We’re working with our local community partners to amplify their support and do our best to help those in need.”

“Tyson Foods has been a longtime supporter of the district and we appreciate its efforts to meet the needs of our students and families who have been impacted by this storm,” said Dr. Jared Cleveland, Superintendent of Springdale Schools. “Tyson helped establish the Treehouse Pantry as a resource for our district and through the company’s volunteer efforts and protein donations, the pantry is also serving as a key part of our disaster response.” 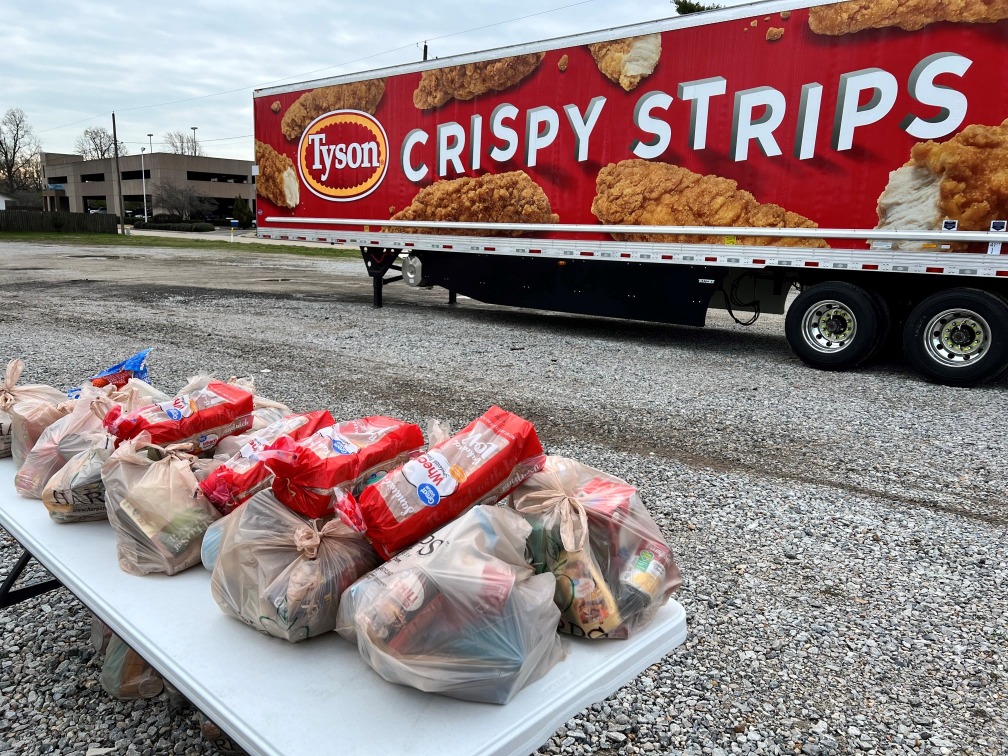 Tyson team members are leading a product drive to donate school supplies and non-perishable food to local families in the Springdale School District who have been displaced by the storms.  The company is also collaborating with other non-profit organizations including Feed The 479, Hope Distributors, the Northwest Arkansas Food Bank and the Springdale Church of God to distribute protein to the community.

Tyson volunteers will also assist with clean-up efforts in Springdale.

Tyson team members often respond when disaster strikes in or near their communities. In 2012, as part of Tyson Foods’ Meals that Matter® disaster relief program, the company outfitted a 53-foot semi-trailer with enough refrigerated space to store up to 20,000 pounds of product for initial response, and dry storage to transport supplies to set up a feeding site and support for Tyson cook teams. The Meals that Matter trailer can distribute more than 100,000 meals per day to victims of disaster, first responders, volunteers and Tyson team members.

Tyson Foods’ Meals that Matter® disaster relief program responded in the aftermath of Superstorm Sandy, major tornadoes in Arkansas, Iowa, Missouri and Oklahoma, hurricanes in Florida, Louisiana, North Carolina and Texas and numerous natural disasters like wildfires and flooding in communities across the U.S.

Tyson Foods, Inc. (NYSE: TSN) is one of the world’s largest food companies and a recognized leader in protein. Founded in 1935 by John W. Tyson and grown under four generations of family leadership, the Company has a broad portfolio of products and brands like Tyson®, Jimmy Dean®, Hillshire Farm®, Ball Park®, Wright®, Aidells®, ibp® and State Fair®. Tyson Foods innovates continually to make protein more sustainable, tailor food for everywhere it’s available and raise the world’s expectations for how much good food can do. Headquartered in Springdale, Arkansas, the Company had approximately 137,000 team members on October 2, 2021. Through its Core Values, Tyson Foods strives to operate with integrity, create value for its shareholders, customers, communities and team members and serve as a steward of the animals, land and environment entrusted to it. Visit www.tysonfoods.com.