San Diego, Calif. – October 15, 2020 – Today, Jack in the Box® and Raised & Rooted are announcing the exclusive debut of the Jack’s Unchicken and Jack’s Spicy Unchicken sandwiches at select locations in Monterey and Salinas, Calif., and Reno, Nev. The sandwiches are the first-ever plant-based “unchicken” sandwiches introduced by a quick-service restaurant, and have the taste, crunch and texture to satisfy even the most dedicated sandwich connoisseur. Raised & Rooted is Tyson Foods’ brand of alternative protein products launched in 2019.

Made from pea protein isolate and Jack in the Box’s traditional crispy breading, the Unchicken sandwiches deliver mouthwatering taste with a savory crunch and texture sure to rival the competition. The sandwiches are available in two varieties, regular and spicy, and will be available a la carte and as a combo option. 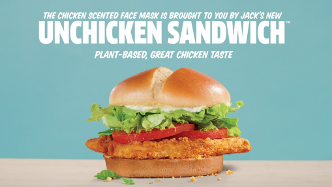 “Jack in the Box is delivering industry leading innovation with the first plant-based chicken sandwich at retail in the U.S.,” said Jennifer Kennedy, chief product officer, Jack in the Box. “We are excited to meet the growing demand for meatless alternatives with our new Unchicken sandwiches providing indulgent taste, crispy crunch, and savory flavor in a new plant-based option.”

Chicken sandwiches consistently top the list of most ordered delivery items, and during the pandemic, “chicken” has been the most tweeted about food . Though not containing any chicken itself, the love for chicken sandwiches, combined with a continued interest and increase in plant-based food consumption, makes the first-to-market Jack’s Unchicken sandwiches a timely, enticing addition to menus for meat and plant eaters alike.

“We believe this is the best tasting plant-based product in the market today,” said David Ervin, vice president of marketing for the Raised & Rooted brand. “We are excited to be partnering with Jack in the Box to bring the delicious taste people have come to love from our plant-based Nuggets and Tenders, to even more people with the Unchicken sandwiches.”

1Food&Wine, Here are the foods we’ve been talking about during quarantine according to Twitter. Sept. 15, 2020.

About Jack in the Box

Jack in the Box Inc. (NASDAQ: JACK), based in San Diego, is a restaurant company that operates and franchises Jack in the Box® restaurants, one of the nation’s largest hamburger chains, with more than 2,220 restaurants in 21 states. Known as the pioneer of all-day breakfast, and the late night category, Jack in the Box prides itself on being the curly fry in a world of regular fries. For more information on Jack in the Box, including franchising opportunities, visit www.jackinthebox.com. If you have media inquiries, please reach out to media@jackinthebox.com.