Springdale, Ark. – August 20, 2018 – Tyson Foods, Inc. (NYSE: TSN) today announced it has reached a definitive agreement to buy the Keystone Foods business from Marfrig Global Foods for $2.16 billion in cash. The acquisition of Keystone, a major supplier to the growing global foodservice industry, is Tyson Foods’ latest investment in furtherance of its growth strategy and expansion of its value-added protein capabilities.

The acquisition includes six processing plants and an innovation center in the U.S. with locations in Alabama, Georgia, Kentucky, North Carolina, Pennsylvania and Wisconsin. (It does not include the beef patty processing plant in Ohio.) It also includes eight plants and three innovation centers in China, South Korea, Malaysia, Thailand and Australia.

“Keystone is a leading global protein company and will be a great addition to Tyson Foods,” said Tom Hayes, president and CEO of Tyson Foods. “This acquisition will expand our international presence and value-added production capabilities and help us deliver more value to our foodservice customers. Keystone provides a significant foundation for international growth with its in-country operations, sales and distribution network in high growth markets in the Asia Pacific region as well as exports to key markets in Europe, the Middle East and Africa. We look forward to serving customers with these additional capabilities and to welcoming Keystone’s dedicated team members to the Tyson Foods family.”

Keystone, which employs approximately 11,000 people, generated annual revenue of $2.5 billion and Adjusted EBITDA of $211 million in the last 12 months ending June 30, 2018, excluding non-controlling interest and other adjustments1. During the same period, the company generated approximately 65 percent of its revenue from U.S.-based production and the remaining 35 percent from its Asia Pacific plants.

1Please see the Keystone Foods Adjusted EBITDA reconciliation at the end of this release.

Tyson Foods expects the acquisition to be accretive to GAAP EPS in the third year and  accretive to adjusted EPS in the first year excluding transaction-related costs as well as the incremental depreciation and amortization associated with the transaction.  It also expects to generate annual synergies of approximately $50 million by the third year of the acquisition, driven by operational efficiencies, procurement savings, distribution and supply network optimization and other opportunities.

The acquisition will be funded through a combination of existing liquidity and proceeds from the issuance of new debt. Initial leverage metrics are expected to be well within levels appropriate for the company’s existing investment-grade credit ratings. The company plans to use its cash flows to pay down debt to continue to support its credit ratings and to strengthen its balance sheet.

The transaction, which has been approved by Tyson Foods’ board of directors, is expected to close in mid-fiscal 2019. It is subject to customary closing conditions, including regulatory approvals.

Morgan Stanley & Co. LLC is acting as exclusive financial adviser to Tyson Foods on the acquisition, and Davis Polk & Wardwell LLP is acting as its legal counsel. 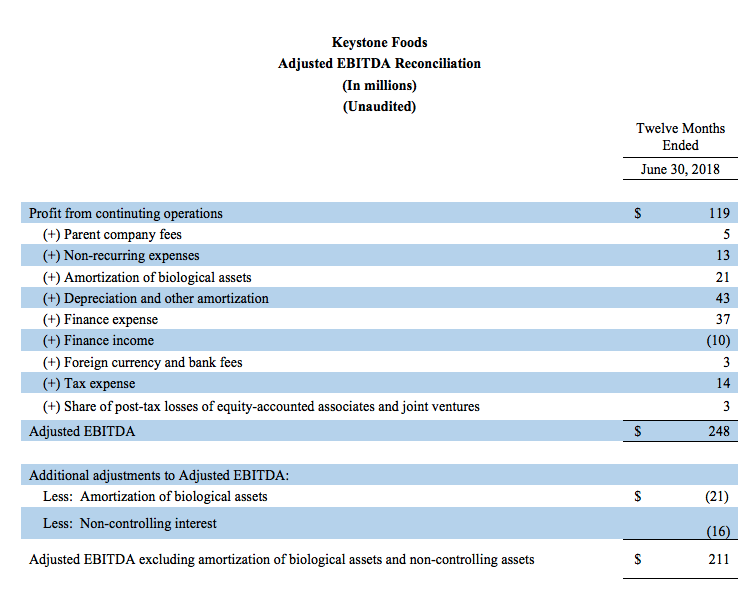 Keystone Foods prepares its consolidated financial statements in accordance with International Financial Reporting Standards, as issued by the International Accounting Standards Board (collectively, “IFRS”).  Keystone Foods provided Tyson Foods with this reconciliation of Adjusted EBITDA, which was derived from Keystone Foods’ historical unaudited financial statements for the twelve months ended June 30, 2018.  Adjusted EBITDA is a non-IFRS measure used by Keystone Foods.  Keystone Foods defined Adjusted EBITDA as profit from continuing operations, as adjusted for parent company fees, non-recurring expenses, amortization of biological assets, depreciation of tangible fixed assets and amortization of finite lived intangibles, finance expense, finance income, foreign currency and bank fees, tax expense and share of post-tax losses of equity accounted associates and joint ventures.  Additionally, Keystone Foods provided Tyson Foods with further adjustments to its Adjusted EBITDA to eliminate the add-back of amortization of biological assets as well as deduct the proportionate share of Adjusted EBITDA attributable to minority interest holders (i.e. non-controlling interest).  In accordance with generally accepted accounting principles in the United States (in accordance with which Tyson Foods prepares its consolidated financial statements), biological assets and the related expenses are not characterized as intangible assets or amortization expense.  Additionally, several of Keystone Foods foreign consolidated subsidiaries are partially owned by minority interest holders.  As a result, these adjustments have been eliminated in the above presentation of Adjusted EBITDA, and these adjustments are intended to provide investors with an understanding of the proportionate Adjusted EBITDA attributable to the interests being acquired by Tyson Foods.

Tyson Foods, Inc. (NYSE: TSN) is one of the world’s largest food companies and a recognized leader in protein. Founded in 1935 by John W. Tyson and grown under three generations of family leadership, the company has a broad portfolio of products and brands like Tyson®, Jimmy Dean®, Hillshire Farm®, Ball Park®, Wright®, Aidells®, ibp® and State Fair®. Tyson Foods innovates continually to make protein more sustainable, tailor food for everywhere it’s available and raise the world’s expectations for how much good food can do. Headquartered in Springdale, Arkansas, the company has 122,000 team members at Sept. 30, 2017. Through its Core Values, Tyson Foods strives to operate with integrity, create value for its shareholders, customers, communities and team members and serve as a steward of the animals, land and environment entrusted to it. Visit www.tysonfoods.com.