“The year is off to the best start in company history with record earnings, record operating income and record cash flows,” said Tom Hayes, president and chief executive officer of Tyson Foods. “Return on sales for each operating segment was in or above the normalized range. The tremendous returns generated in the Beef and Pork segments are providing fuel for growth in our value-added Chicken and Prepared Foods segments.

“Tyson Foods again led retail food manufacturers in both sales volume and sales dollars for the 13-week period corresponding with our fiscal first quarter. Not only did we lead in sales volume, according to IRI, we were the only company to show volume growth among the top 10 branded food companies.

“Due to our outstanding performance in Beef and Pork and strong market conditions in the first quarter, we are raising our annual earnings guidance to $4.90-5.05 per share. We expect the earnings cadence for the remainder of the fiscal year to follow more normal patterns, including the seasonality typical of our second quarter.

“We’re on a path toward what we expect to be our fifth straight year of record results. Our path won’t be linear, but our team is focused on delivering long-term growth and creating shareholder value.” 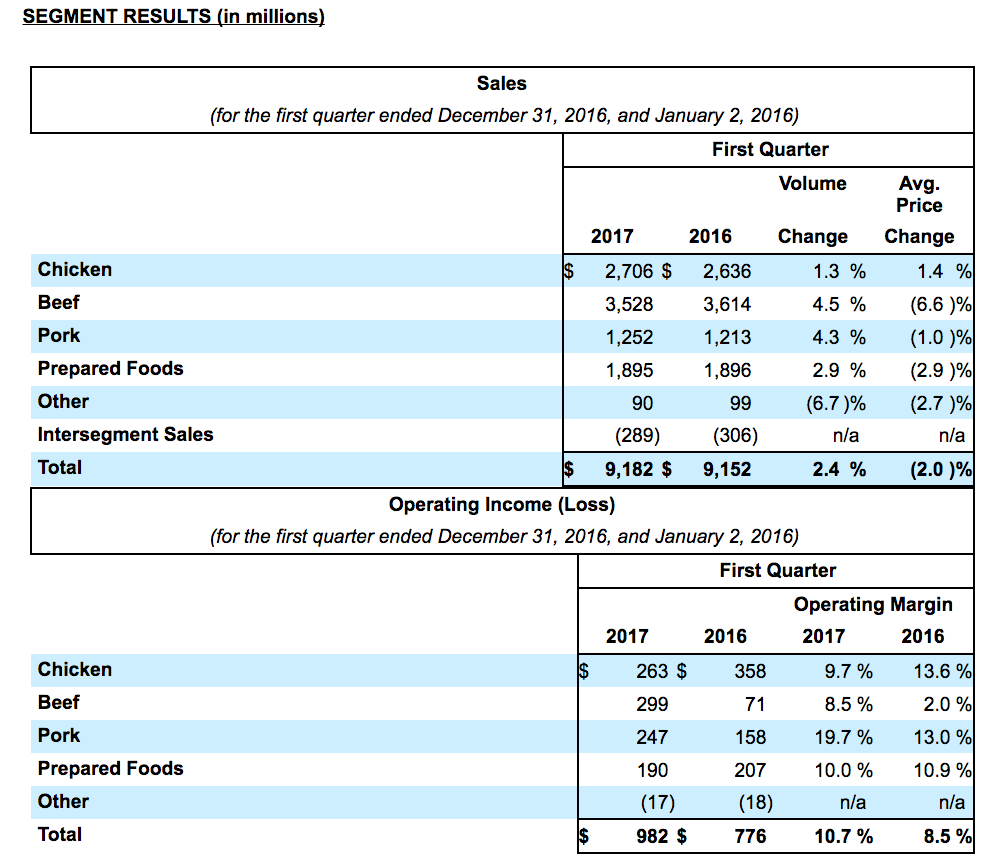 In fiscal 2017, USDA indicates domestic protein production (chicken, beef, pork and turkey) should increase approximately 2-3% from fiscal 2016 levels and moderate export growth. As we continue with the integration of Hillshire Brands, we expect to realize synergies of around $675 million in fiscal 2017 from the acquisition as well as our profit improvement plan for our legacy Prepared Foods business with some incremental synergies expected to be realized in fiscal 2018. The majority of these benefits will be realized in our Prepared Foods segment. The following is a summary of the outlook for each of our segments, as well as an outlook on sales, capital expenditures, net interest expense, liquidity and share repurchases for fiscal 2017. 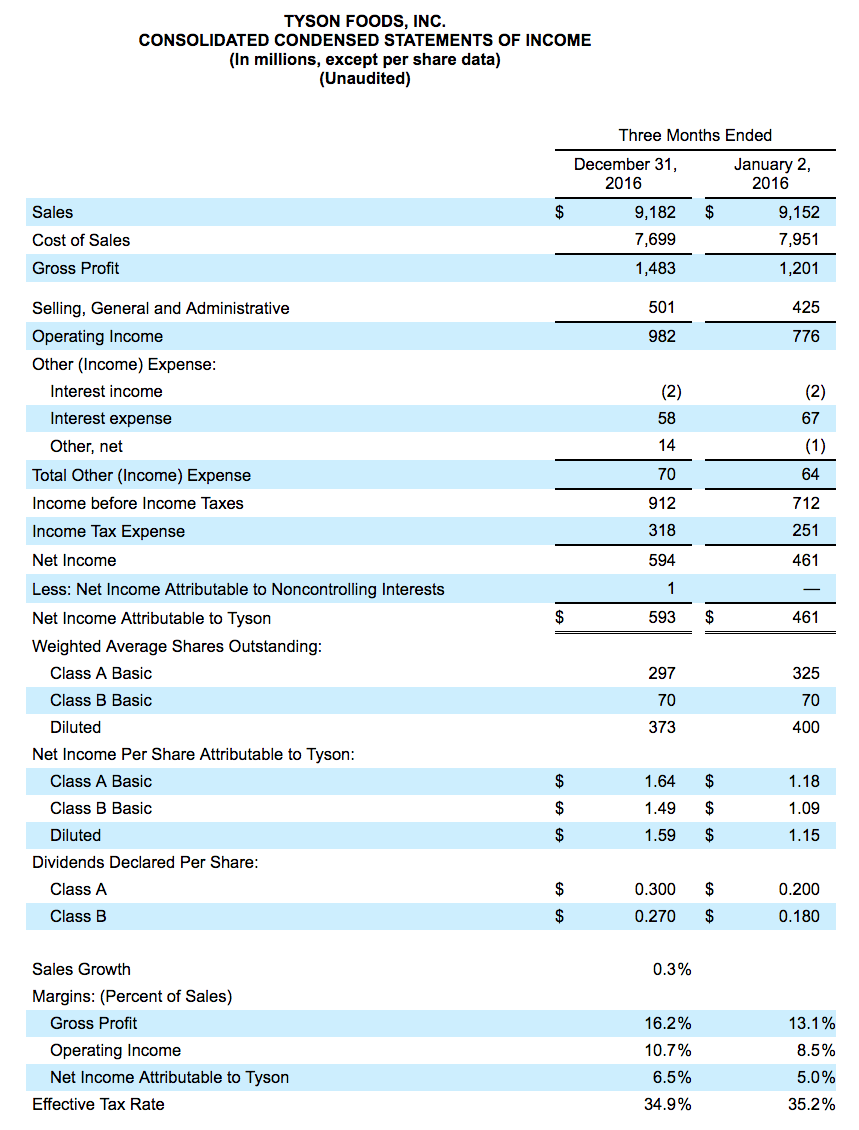 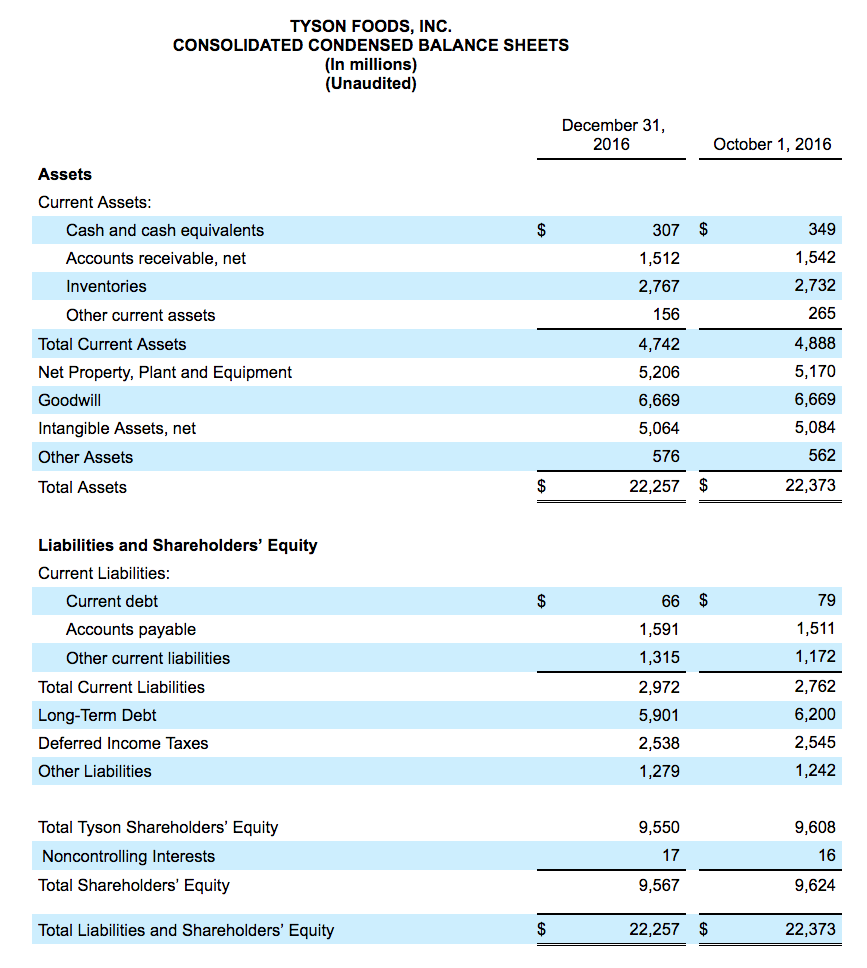 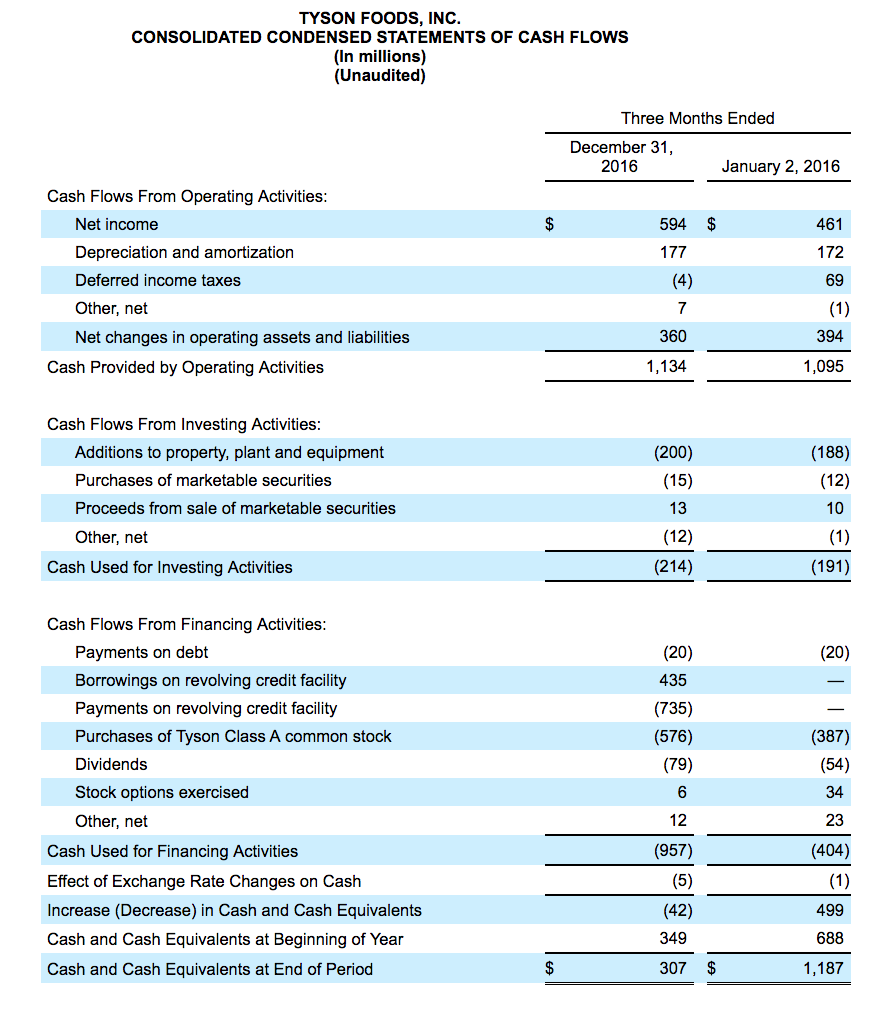 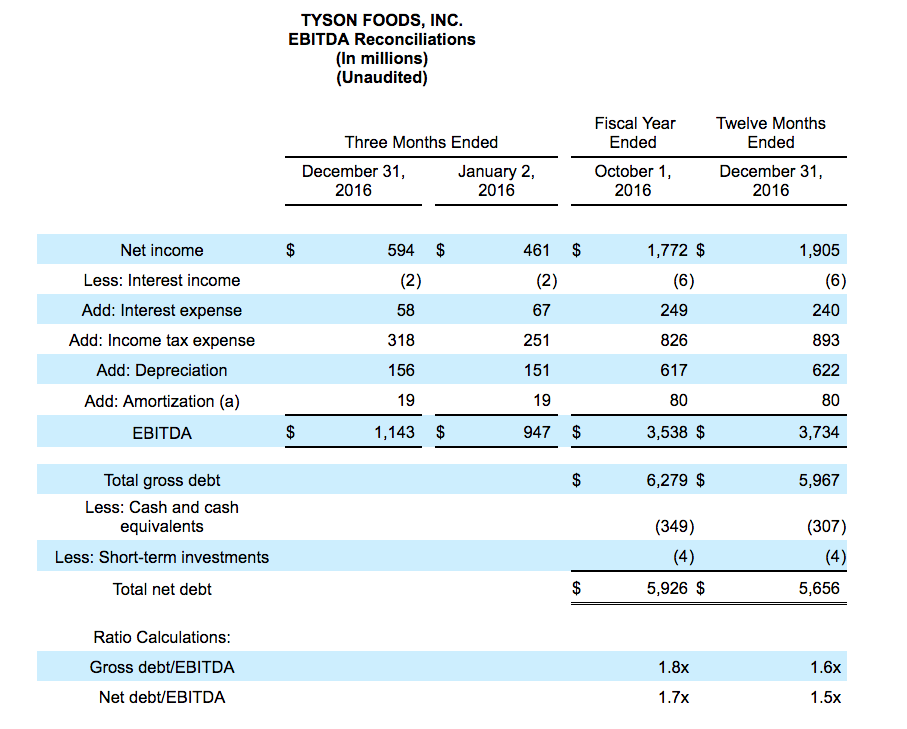 EBITDA is defined as net income before interest, income taxes, depreciation and amortization. Net debt to EBITDA represents the ratio of our debt, net of cash and short-term investments, to EBITDA. EBITDA and net debt to EBITDA are presented as supplemental financial measurements in the evaluation of our business.  We believe the presentation of these financial measures helps management and investors to assess our operating performance from period to period, including our ability to generate earnings sufficient to service our debt, and enhances understanding of our financial performance and highlights operational trends. These measures are widely used by investors and rating agencies in the valuation, comparison, rating and investment recommendations of companies; however, the measurements of EBITDA and net debt to EBITDA may not be comparable to those of other companies, which limits their usefulness as comparative measures. EBITDA and net debt to EBITDA are not measures required by or calculated in accordance with generally accepted accounting principles (GAAP) and should not be considered as substitutes for net income or any other measure of financial performance reported in accordance with GAAP or as a measure of operating cash flow or liquidity. EBITDA is a useful tool for assessing, but is not a reliable indicator of, our ability to generate cash to service our debt obligations because certain of the items added to net income to determine EBITDA involve outlays of cash. As a result, actual cash available to service our debt obligations will be different from EBITDA. Investors should rely primarily on our GAAP results and use non-GAAP financial measures only supplementally in making investment decisions.

Tyson Foods, Inc., with headquarters in Springdale, Arkansas, is one of the world's largest food companies with leading brands such as Tyson®, Jimmy Dean®, Hillshire Farm®, Sara Lee®,  Ball Park®, Wright®, Aidells® and State Fair®. It’s a recognized market leader in chicken, beef and pork as well as prepared foods, including bacon, breakfast sausage, turkey, lunchmeat, hot dogs, pizza crusts and toppings, tortillas and desserts. The company supplies retail and foodservice customers throughout the United States and approximately 115 countries. Tyson Foods was founded in 1935 by John W. Tyson, whose family has continued to lead the business with his son, Don Tyson, guiding the company for many years and grandson, John H. Tyson, serving as the current chairman of the board of directors. At October 1, 2016, the company had approximately 114,000 Team Members employed at more than 400 facilities and offices in the United States and around the world. Through its Core Values, Code of Conduct and Team Member Bill of Rights, Tyson Foods strives to operate with integrity and trust and is committed to creating value for its shareholders, customers and Team Members. The company also strives to be faith-friendly, provide a safe work environment and serve as stewards of the animals, land and environment entrusted to it.

A conference call to discuss the Company's financial results will be held at 9 a.m. eastern Monday, February 6, 2017. Participants may pre-register for the call at http://dpregister.com/10099233. Callers who pre-register will be given a conference passcode and unique PIN to gain immediate access to the call and bypass the live operator. Participants may pre-register at any time, including up to and after the call start time. Those without internet access or who are unable to pre-register may dial-in by calling toll free 1-844-890-1795 or international toll 1-412-717-9589.

Certain information contained in the press release may constitute forward-looking statements, such as statements relating to expected performance, and including, but not limited to, statements appearing in the “Outlook” section and statements relating to GAAP EPS guidance and adjusted EPS guidance. These forward-looking statements are subject to a number of factors and uncertainties which could cause our actual results and experiences to differ materially from the anticipated results and expectations expressed in such forward-looking statements. We wish to caution readers not to place undue reliance on any forward-looking statements, which speak only as of the date made. Among the factors that may cause actual results and experiences to differ from anticipated results and expectations expressed in such forward-looking statements are the following: (i) the effect of, or changes in, general economic conditions; (ii) fluctuations in the cost and availability of inputs and raw materials, such as live cattle, live swine, feed grains (including corn and soybean meal) and energy; (iii) market conditions for finished products, including competition from other global and domestic food processors, supply and pricing of competing products and alternative proteins and demand for alternative proteins; (iv) successful rationalization of existing facilities and operating efficiencies of the facilities; (v) risks associated with our commodity purchasing activities; (vi) access to foreign markets together with foreign economic conditions, including currency fluctuations, import/export restrictions and foreign politics; (vii) outbreak of a livestock disease (such as avian influenza (AI) or bovine spongiform encephalopathy (BSE)), which could have an adverse effect on livestock we own, the availability of livestock we purchase, consumer perception of certain protein products or our ability to access certain domestic and foreign markets; (viii) changes in availability and relative costs of labor and contract growers and our ability to maintain good relationships with employees, labor unions, contract growers and independent producers providing us livestock; (ix) issues related to food safety, including costs resulting from product recalls, regulatory compliance and any related claims or litigation; (x) changes in consumer preference and diets and our ability to identify and react to consumer trends; (xi) significant marketing plan changes by large customers or loss of one or more large customers; (xii) adverse results from litigation; (xiii) impacts on our operations caused by factors and forces beyond our control, such as natural disasters, fire, bioterrorism, pandemics or extreme weather; (xiv) risks associated with leverage, including cost increases due to rising interest rates or changes in debt ratings or outlook; (xv) compliance with and changes to regulations and laws (both domestic and foreign), including changes in accounting standards, tax laws, environmental laws, agricultural laws and occupational, health and safety laws; (xvi) our ability to make effective acquisitions or joint ventures and successfully integrate newly acquired businesses into existing operations; (xvii) cyber incidents, security breaches or other disruptions of our information technology systems; (xviii) effectiveness of advertising and marketing programs; and (xix) those factors listed under Item 1A. “Risk Factors” included in our Annual Report filed on Form 10-K for the period ended October 1, 2016.