A small number of consumers contacted the company to say they had found small pieces of hard, white plastic in the nuggets, prompting the company to issue the recall. Though the plastic pieces have been found in a very small number of packages, out of an abundance of caution, the company is recalling 132,520 pounds of product. No injuries have been reported with this recall. Products sold in smaller packages or at any other retailer are not affected by this recall. 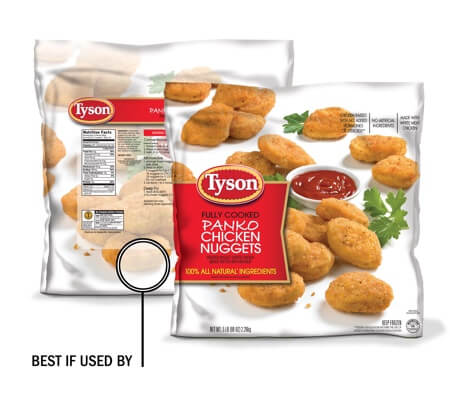 The products subject to recall bear establishment number “P-13556” printed adjacent to the “Best If Used By” date on the back of the package. The cases of bulk Spare Time patties (Item# 23575-861) have the same “use by” dates listed above.

If you have purchased any of the affected items, you should discard the product, cut the UPC and date code from the back of the packaging and mail it to the following address for a full refund:

Tyson Foods has inspected all lines at the production facility to ensure product quality standards are being met and has implemented corrective measures at all of its facilities to prevent similar occurrences.

Consumers with questions may call Tyson Consumer Relations at 866-328-3156 or e-mail comments@tyson.com. News media who have questions should contact Worth Sparkman at 479-290-6358 or worth.sparkman@tyson.com.