The donated product will be distributed to the food-insecure population in the food bank’s 22 county service area, which it has served for the past 35 years. With its network of over 417 partner agencies, the food bank distributed more than 25 million pounds of food last year.

“The Food Bank of Eastern Michigan greatly appreciates this generous and timely gift from Tyson Foods,” Food Bank of Eastern Michigan President William E. Kerr said. “Iron rich foods, like chicken, can help protect adults and children from the harmful effects of lead, by keeping too much lead from being absorbed into the body.  All of the Food Bank’s Partner Agencies will benefit from having more high protein chicken available for families in need.”

Meat and poultry are nutrient dense foods, according to health experts, and can be especially helpful to people who need more protein, including growing children, pregnant women, the elderly, and anyone undergoing severe stress, disease or disability. According to food banks nationwide, meat is the most requested and least available food. Since 2000, Tyson Foods has donated more than 100 million pounds of protein in the United States.

“Of the more than 331,500 people fed each year by the Food Bank of Eastern Michigan, 71,942 are children,” said Annetta Tirey, director of corporate social responsibility for Tyson Foods. “Food insecurity affects all age groups and all communities. It’s our goal to help alleviate this need by providing protein to those in need and raising awareness about how important protein is in a diet.” 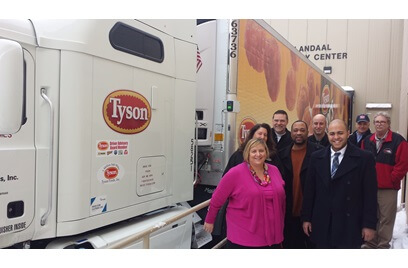 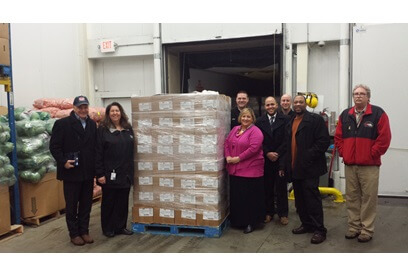 Tyson Foods’ “KNOW Hunger” campaign is focused on helping more people understand and join the effort to eliminate hunger in America. The company partners with Feeding America, Share Our Strength and Lift Up America to raise awareness and help feed the hungry across the nation. Among all processors, Tyson Foods is the largest donor of meat and poultry to Feeding America and its network of food bank.

U.S. Sen. Debbie Stabenow (D-MI) said the donation of protein means a lot to the communities in Eastern Michigan.

“One of the things that makes our country so great is how we rally around each other in times of hardship,” Senator Stabenow said. Throughout this crisis, I have seen this compassion through the acts of partners like Tyson Foods to help support the people of Flint. Together we will all help this community recover.”