The donation is one of two events in fulfillment of the 3rd annual “Be a Hunger Hero” campaign, which encourages shoppers to purchase a 5-pound bag of Tyson® Fully Cooked Chicken Nuggets at Sam’s Club to help feed a child in need. Also Tuesday, the food bank distributed 10-pound bags of frozen chicken to food-insecure residents.

Delta Network Food Bank provides food assistance to residents in eight counties in the Arkansas Delta Region. This region has the highest level of poverty in the state.

“The phone call advising us that Tyson Foods had chosen the Delta Network Food Bank to receive a truckload of chicken came at the most opportune time. During the winter months, beginning with Thanksgiving, our inventory in the warehouse was really reduced because of the demand for food from the families we serve,” Director Jacqueline Ross said. “We are so grateful to Tyson Foods for providing this food to families that are experiencing food insecurity in the Arkansas Delta Region. Thanks for helping us to see our motto in action: ‘Together We Can Make a Difference.’”

Meat and poultry are nutrient dense foods and, according to health experts, can be especially helpful to people who need more protein including children and seniors. According to food banks nationwide, meat is the most requested and least available food item. 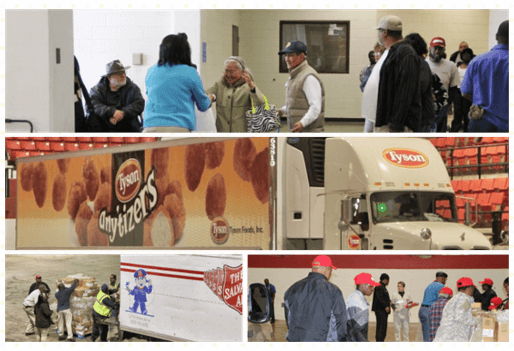 “We are so proud to partner with Tyson Foods, because they’ve proven time and time again they are committed to fighting child hunger. Together, we understand that before children can succeed, we have to meet their basic needs. We’ve seen the effect that a donation like this can make in a community. It means children are more ready to learn, and they grow up more determined to make the world better in ways we can’t imagine,” said Adelaide Schaeffer, CEO of Champions for Kids.

Tyson Foods has been an active participant in the fight against hunger for a decade, donating more than 100 million pounds of protein. The company partners with Share Our Strength, Lift Up America, Feeding America, and the League of United Latin American Citizens to raise awareness and help feed the hungry across the nation. The company’s current “KNOW Hunger” campaign is focused on helping more people understand and join the effort to eliminate hunger in America. Last year, Tyson Foods pledged $50 million in cash or in-kind donations over the next five years in the continued fight against hunger, with a special focus on innovative initiatives.

“With Arkansas’ food-insecurity rate at 19.7 percent, Tyson Foods is honored to partner with Champions for Kids to provide much needed protein to the Delta Network Food Bank and address some of the area’s immediate need,” said Mikki DeWitt, Tyson Foods’ marketing manager.