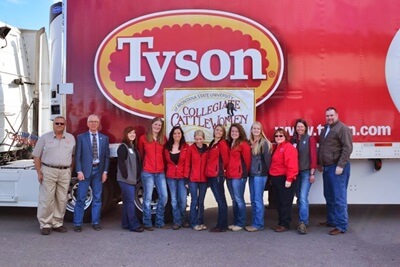 During the fall 2015 competition, participating clubs were able to pick and choose from a variety of challenges, including teaching at local schools, hosting an Agriculture Day event on their college campus, or hosting a food drive in advance of the holiday season. The Montana State University Collegiate CattleWomen took home top honors in the food drive competition by collecting more than 1,100 pounds of food to donate to the Gallatin Valley Food Bank. This win earned the club a donation in their honor from CAO program sponsor Tyson Foods.

“This is a proud moment for our college,” said Charles Boyer, vice president of agriculture/dean and director of the College of Agriculture and the Montana Agricultural Experiment Station at Montana State University. “The exemplary focus and determination of our students is a stellar example of our country’s bright future. We celebrate this contribution to community good by our outstanding students.” 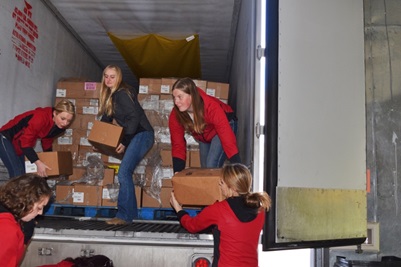 The winning CAO students and club representatives will also be recognized during the Alliance’s 2016 Annual Stakeholders Summit May 5-6 in Arlington, Virginia.

“Being a part of this donation is always a highlight of our year for the Alliance,” said Kay Johnson Smith, Alliance president and CEO. “It is both personally and professionally fulfilling to see the look of pride on the students’ faces as they witness their hard work and passion coming to fruition and allowing them to give back to their communities in such a meaningful way. We are so thankful to Tyson Foods for its continued support of our College Aggies Online program and this year’s generous donation on behalf of the Montana State University Collegiate CattleWomen.”

Meat and poultry are nutrient-dense foods and, according to health experts, can be especially helpful to people who need more protein including children and seniors. According to food banks nationwide, meat is the most requested and least available food item.

“This is an incredible donation that will assist thousands of individuals facing food insecurity,” said Jill Holder, operations manager for the Gallatin Valley Food Bank. “We are grateful to Tyson Foods and the Animal Agriculture Alliance for partnering with the MSU Collegiate CattleWomen to help those who are struggling to feed themselves and their families.”

Tyson Foods has been an active participant in the fight against hunger for a decade, donating more than 100 million pounds of protein. The company partners with Share Our Strength, Lift Up America, and the League of United Latin American Citizens to raise awareness and help feed the hungry across the nation, and among all processors, Tyson Foods is the largest donor of meat and poultry to Feeding America and its network of food banks. The company’s current “KNOW Hunger” campaign is focused on helping more people understand and join the effort to eliminate hunger in America. Last year, Tyson Foods pledged $50 million in cash or in-kind donations over the next five years in the continued fight against hunger.

“We’re always looking for ways to raise awareness about the seriousness of hunger across the country and this is one of those events that does that, while meeting the immediate need of hunger that so many face,” said J. Holmes, Tyson Foods’ regional director of cattle procurement.

For more information about Tyson Foods’ donation or the CAO program, please contact Hannah Thompson at (703) 562-1413.

About Animal Agriculture Alliance
The Animal Agriculture Alliance is an industry-united, nonprofit organization that helps bridge the communication gap between farm and fork. We connect key food industry stakeholders to arm them with responses to emerging issues. We engage food chain influencers and promote consumer choice by helping them better understand modern animal agriculture. We protect by exposing those who threaten our nation’s food security with damaging misinformation. Find the Alliance on Facebook and Twitter.